We've just spent some time exploring and chilling in the Pays Basque (yes, yes, a holiday ... what Protestant work ethic?). It's not a region that I knew well: one camping holiday many years ago (it rained), and another five years ago when we were house hunting (too expensive, and it rained). Well, guess what? It didn't rain. Not once, in 17 days. And we loved it.

Many things stand out in my memory - the ocean, the light, the green conical hills, the unpronounceable language, the food - but none more than the colour red. To explore a French Basque village is to feast on a symphony of red and white: red shutters and columbage set starkly against the white of the lime used in the facades. It doesn't do to be an individualist here. 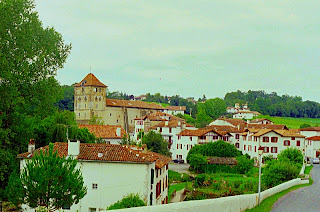 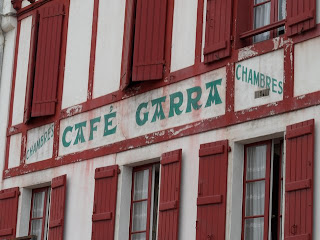 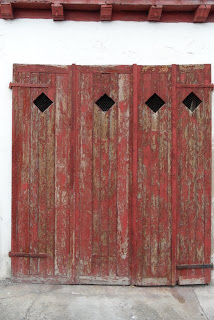 And as if all that weren't enough, there's the red of the Espelette peppers that help make the local cuisine so distinctive and of which I've been an unconditional fan for a long time. So of course an early pilgrimage to Espelette itself was called for - that's it, in the first picture above - to worship at the feet of the piment and its growers. 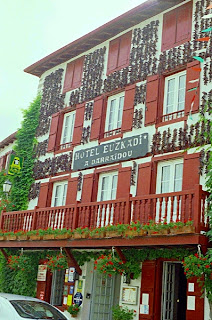 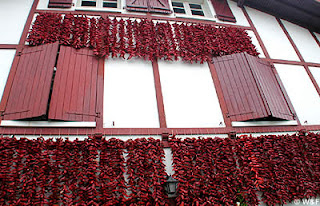 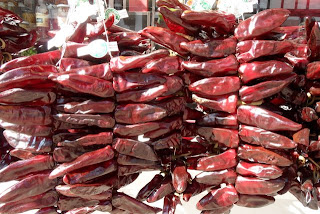 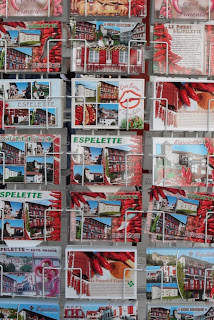 As you can see, Espelette does a pretty good job of worshipping at the piment's feet all on its own. But for all that it remains a very attractive and characterful place. We went on a long walk in the hills around the village, and it was a Big Thing for me to see fields of the newly planted seedlings everywhere. I even managed to persuade one of the growers to let us have a few plants to bring home, although I'm not quite sure what to make of the way he laughed so maniacally when I told him we lived at an altitude of 500 metres .... 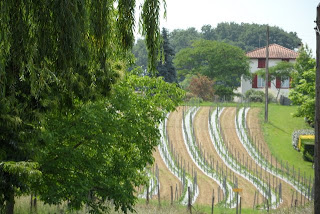 And then we came home.

And in the tiniest window between the opening of the heavens, we picked 12 kilos of red cherries. 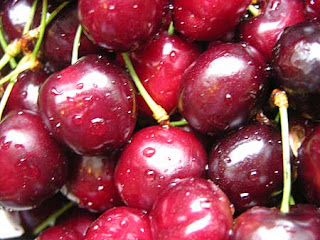 It's our biggest, best and - erm - reddest crop since we moved here. 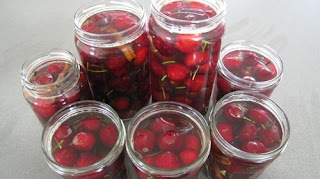 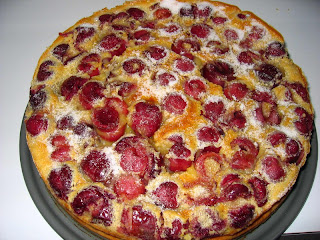 One weekend, several hours with the cherry stoners, ten pots of cherry jam, seven bottles of conserve, one clafoutis and a huge tray of frozen cherries later, and I'm still seeing red.

Oh, and it's still raining.
Posted by Kalba Meadows at 22:03

That is 12 kilos more cherries that we have on our poor trees. Rain, rain, rain. We are growing webbed feet here in Southern Oregon, USA!
My son-in-law is a chili pepper breeder who lives in California. Their home base is in France! He will be traveling to Paris this month. Lucky him!
He travels the world checking on the fields of peppers.
I am sending him a link to your current posting! What lovely photos.
I was in St. Jean Pied de Port 6 years ago and yearn to return.. . next year for sure!

Lucky SIL - sounds like my dream job! I'm addicted to peppers of all kinds (in case you hadn't noticed).

I'm so sorry to hear about your rain. We've had an almost-drought for months now - over 60 départements are on restrictive measures - and we've all been waiting for rain to come and green things up again. Now that it's here, of course - and with little sunshine in prospect for the next week at least - we're all complaining! C'est la vie!