It's hot. And that's official.

Like the rest of the country, we're in the midst of a heatwave: temperatures have hit 38 degrees in the shade over the last two days. A couple of cooler days forecast for Wednesday and Thursday, and then more hot and sunny weather; this will, we're told, be the pattern for the rest of the summer, with temperatures distinctly higher than average. Good news for the ratatouille bed in the potager which was planted so late: it's already showing signs of catching up.

A treat yesterday, when the sun was blazing down in the middle of the day and the thermometer was showing 52 degrees in the sun: quite by chance I watched our baby black redstart leave the nest. He (or she. Here we go again) fluttered down onto the grass, looked around, and then bowed several times. Redstarts, if you haven't seen them, bow all the time, like robins only more so; I just didn't expect them to start so young. They're also intensely curious birds: an hour or so later I found him sitting in the brico shed calling furiously for food. 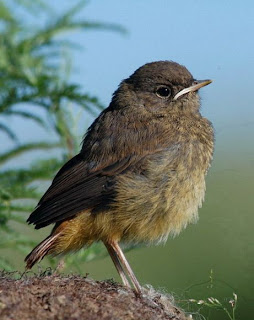 You could say that the heat is slightly less good news for us as we continue to clear the rock garden, but hey - what's a bit of sweat when you're having fun? And it does mean that during the hottest part of the day we get to take refuge inside and get on with all the interminable finishing jobs, like framing pictures and hemming curtains and sorting out all the kitchen equipment for L'Atelier. (Never, dear renovator, ever underestimate just how long this stage will take you. Why is it that I could tile an entire shower in the time it takes to frame and hang just one picture? And that's without the arguments about whether there's a speck of dust under the glass or whether it's straight or not). But we are getting there (even if - sigh - the water still isn't connected: plumber has been, plumber has gone, plumber hasn't finished, plumber is coming back. Just don't ask when).

It's been a particularly frustrating couple of weeks in that I've been getting lots of contacts from some really interesting people - mostly readers of this blog, as it happens - who've wanted to come and stay this summer, and because of everything you already know about I'm still having to say no, which frankly is a bit upsetting. Not for the money, though that would indeed be quite nice, but because without exception they've all sounded like people I would enjoy having around, and because I just have a whole big feeling that Grillou is now ripe for people to be here. It's the first time I've felt that as an actuality rather than as a potential, which means I think that something has shifted on an energy level (look away now if you don't believe this stuff) and therefore that we're on course for all to be well.
Posted by Kalba Meadows at 00:13