Le Cap du Carmil: a balcony on the Pyrénées

The walk we did today is not a famous one. It's part of the GR du Pays de la Barguillère, but not in the major guide books; it's not in one of Ariège's newly sexy valleys like Bethmale or Bellongue. It's tucked away in the Séronais, in the middle of a deeply unspoilt, forested region with great natural beauty but almost no habitation. So what a lot of people don't know is that with a couple of hours and 400 metres or so of relatively easy climbing, a 360 degree panorama is yours, and as if that weren't enough, you'll get to eat your lunch looking at the entire chain of the Pyrénées from Mont Canigou in the east to the Pic du Midi du Bigorre in the west.

After a gentle beginning during which you weave in and out of mixed woodland, you start climbing through an area full of blueberry bushes where the views gradually start opening out on your right. 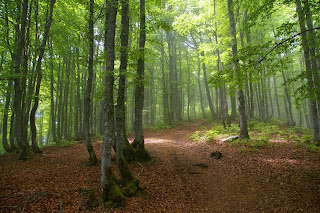 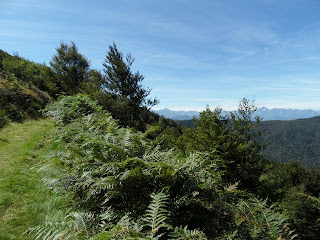 After a while you reach a gate leading to the estive - summer pasture - area; we passed through herds of cattle (including a magnificent and fortunately peaceable bull), horses and mules who were in the main not only curious about us but sociable too. 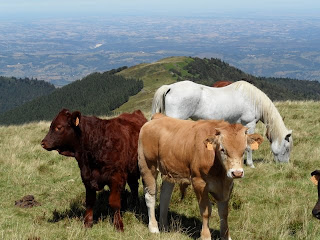 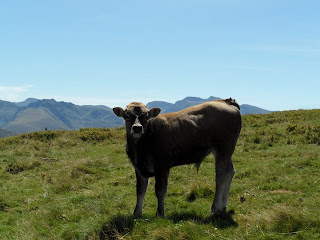 The path winds up to a false summit, at the top of which you see that you're most definitely not there yet ... but the views at this point are already fantastic. Another 75 metres or so of ascent and you're on the Cap - a wide, flat, grassy area: the highest point in the Séronais at 1617 metres. Today was slightly hazy, but even so we could see, apart from the chain, the whole of the department of Ariège plus the Corbières, the Black Mountains, the Petites Pyrénées, into Andorra and Spain, and in the distance the first buildings of the built up jungle of Toulouse. 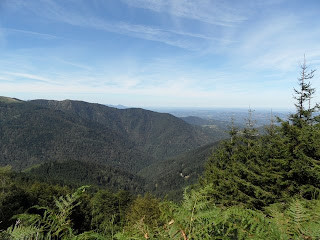 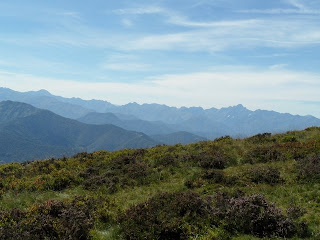 We spent a long time on the end of our binoculars, in particular trying to locate Grillou (not easy as ours is one of the most hidden houses I've ever come across - but we did eventually trace the clearing in which the house and grounds sit). 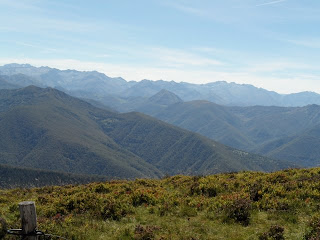 It was fascinating to be able to see how different pays of Ariège may have no vehicular access from one to another, yet are incredibly close - often just a couple of kilometres apart, yet separated by a huge massif of rock. And it was fascinating too to try and tease out all the valleys that sit just underneath Mont Valier, the emblematic high peak of the Couserans region (the one and only advantage of winter, as far as I'm concerned, is that you can see Mont Valier from our garden - in the summer it's hidden by leaves and you have to content yourself with the view - a full-frontal one - from the track). The day wasn't without ornithological treats either: we were buzzed by bee eaters, possibly en route to overwinter in Africa, and a flock of hobby falcons, and as we ate lunch we spent a long time watching four golden eagles soaring on the thermals. 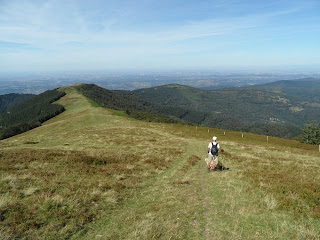 Oh yes, and when you've come down and it's still hot and your knees are protesting and you've broken your walking pole and you realise that even though you've been outside for much of the summer and it's now September you've got a bit sunburnt, it's less than a five minute hop in the car to the Auberge de Marrous and its lovely garden bar.
Posted by Kalba Meadows at 00:48