From Notre Dame de Celles, the road snakes over some lovely, hidden countryside below Mont Fourcat (which I confess I'd never heard of), past remote and tiny hamlets - one of which in particular fascinated me as all four houses appear to have their doors opening onto a communal courtyard. The residents must obviously be a lot more tolerant than I am. After a while we hit the village of Montferrier - the main street of which is so narrow that we had to reverse no less than three times before we could pass - where I'm told there is a bar-restaurant, but as I've never managed to locate it, that may be an unfounded rumour (actually, I've never quite 'got' Montferrier - we once went to view a house there but rapidly made an excuse and left, though that of course could just be me ...). Never mind - the scenery is beautiful, and never less than when suddenly the Cathar castle of Montségur appeared before us. 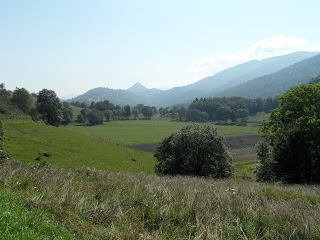 Montségur is probably the most well known of all the Cathar sites and has developed something of a cult following in recent years. In a nutshell, it was the last major stronghold of the Cathars during the Crusades, when it was besieged by the royal troops of the Catholic church for some ten months. When the Cathars there finally surrendered, they were given the choice of renouncing their faith, or being burned. Over 200 of them refused to renounce and were burned in a field just below the castle. Impossible to think about that without a small shiver running up the spine ... 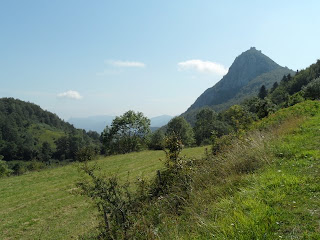 There are legends too: some say that it was the last known resting place of the Holy Grail. And as if all that weren't enough, it surely can't be a coincidence that the building is designed so that on the morning of the summer solstice the first rays of sunlight shine in through the windows on one side, through the keep, and out of the windows on the other side ... (In actual fact, the present chateau apparently post-dates that occupied by the Cathars, which was destroyed by the royal troops, but hey - when did any of us let facts get in the way of a good story?).

Not long after passing Montségur we reached the long drawn out and rather strange village of Fougax-et-Barrineuf. Passing swiftly on, in more ways than one, we took a small road leading to the Gorges de la Frau and drove to the point where the tarmac ran out - the start of our walk. No gentle warm up to this walk: straight away you're puffing up a steep gradient as the path - not much more than a loose pile of rocks at this point - climbs up between the rocks that tower some 400 metres above you to either side. 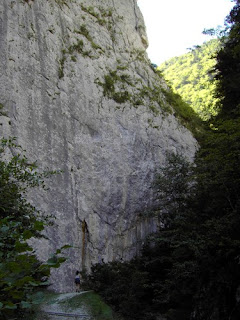 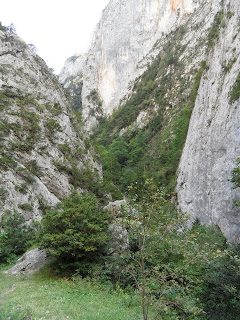 The gorges are part of a Réserve Biologique, designed to protect ancient forested areas that have somehow managed to remain un-messed-about-with by us humans, and to allow their biodiversity to evolve naturally and with minimal intervention. The gorges are undeniably spectacular, but sadly dry, and I found myself yearning for the sound of running (or even trickling) water. 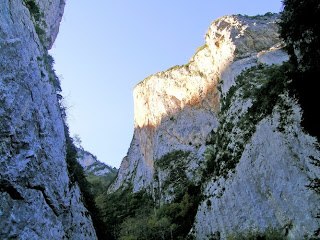 Some three kilometres later, we emerged from the sheerest part of the gorges into the department of Aude. The path turned into a woodland piste, which we followed for another three kilometres to the village of Comus on the edge of the Plateau de Sault ... 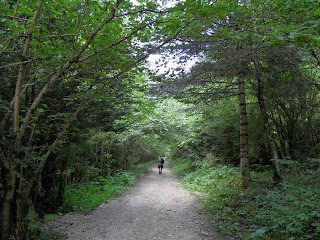 ... and to our destination, Le Silence du Midi. How to describe Le Silence du Midi? It's a wonderful, and quirky, domaine that's been created by a Flemish couple who bought the old buildings, then completely broken down, 10 years ago and finally moved in 5 years later: they have rooms, and a couple of gites, and a yurt, and donkeys to stroke or to hire, and a childrens' play area, and space to put up your tent, and a simple restaurant, and they'll serve you drinks (including some great Belgian beers) and food pretty much at any time - for this is their home, and even if you've just popped in for an ice cream you're their guest. They have an eye for the oddball, and have furnished their terraces with 'finds' from the local brocantes. It's a feelgood place, a Slow place, and we stayed much longer than we'd intended. 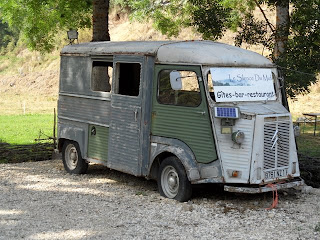 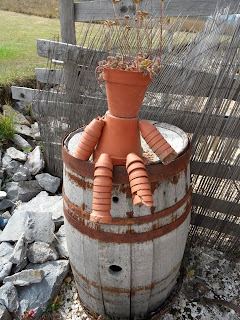 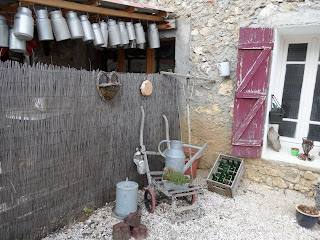 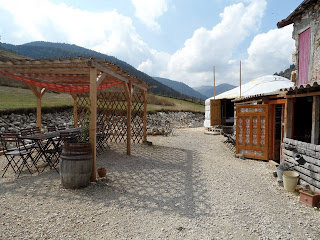