And in staying much longer than we intended, before we knew it it was too late to continue upwards to Le Pas d'Ours, where there is a superb viewpoint over the gorges we'd just walked up. But that's the nature of Slow Walking - the moment is always more important than any pre-fixed plan. Just for good measure, this is what we missed: 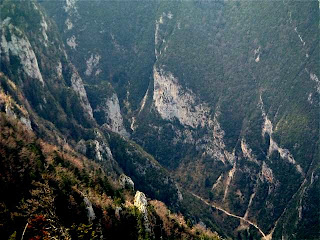 Thanks to Gunther at Le Silence du Midi for that photo. See that little snake-y thing down the bottom? That's the path. The very same path that took us almost as long to walk down as it did to walk up, given the way the stones on the steep bits had a distinct tendency to slide from underfoot and take you where you had no intention, or desire, to go. You have been warned ...

We wound our way back through Belesta to Foix, stopping at the Fontaine de Fontestorbes on the way. Now this is an odd thing. It's an 'intermittent spring', one of only a handful in the world. What that means is that in summer the water flow changes from almost nothing to a raging torrent, and back again, in a cycle that seems to vary between 32 and 70 minutes or so. When we arrived, there was a bit more than a trickle, but not much, and I was just about to follow the stepping stones into the cave when I thought I detected a slight increase in the flow levels. 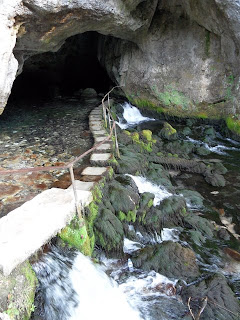 Sure enough, we'd arrived just at the beginning of a cycle; within no more than 5 minutes the source was belting out water at a rate of knots and the stepping stones were part of a waterfall. 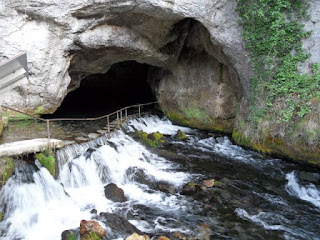 Although it sounds about as exciting as like watching paint dry, it's strangely compulsive viewing (okay, so maybe I have a high boredom threshold). I made a brief attempt to understand the physics behind it - there's an 'idiot's guide' on a panel - but I'm sorry to say that it completely passed me by ... unsurprisingly as my grasp of conventional physics never really got beyond the ball and ring experiment. There's a scarily comprehensive non-idiot's guide here, should you be so inclined. We and a couple of women stayed and watched the water for half an hour or so, filling our water bottles too (ice cold and delicious) until, would you believe, a pensioners' coach party arrived from Toulouse. It was time to go.

We finished the evening in Foix, where it was the first day of the fêtes locales. A huge funfair had taken over the town centre, and it felt as though the whole of Ariége had arrived to watch the firework display. At 10.30 sharp the streetlights went out, the dodgems drifted to a halt, and everybody gathered below the chateau to wait and watch and ooh and aah. It was magnificent. 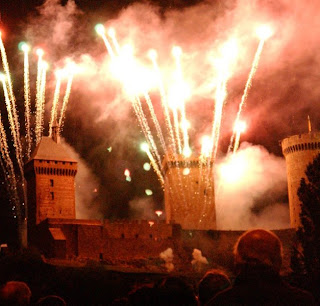 Thank you, Kalba, for the wonderful tour of your part of our world! I tried following along with my Michelin Motoring Atlas of France and did manage to find some of the areas you mentioned.

You're welcome! And there's more to come ... The Michelin road atlas is great - gives a real sense of the lie of the land. I still spend whole evenings sometimes just reading it.
Kalba x