Up among the orris

The swansong to our holiday week saw us making a very last minute decision to take our Quechua pop-up tent away for a couple of nights, to Vicdessos. It was the first camping trip of the year, as evidenced by the ridiculous amount of time and tantrums it took us to dismantle the infamous tent that takes only 15 seconds to put up; we go through this every year, along with half our fellow campers, before we realise that in spite of Decathlon's pretty pictures on the bag it's just not possible to put both blues to both browns before you do that funny twisting thing (if you have a similar tent you'll know exactly what I'm talking about) and you just have to wing it, or ask for help. Still, it's all good for campsite solidarité. At least it would have been, if we'd had any fellow campers to be solid with. This time, in spite of fantastic weather, we were alone, apart from a few semi-permanent caravanners who spent most of their time cleaning their cars and hosing their awnings (or was it the other way round?).

Vicdessos and its twin village Auzat sit up against both the Spanish and the Andorran borders, and at the foot of Montcalm, 3007 metres high and often known as the 'roof' of Ariège. Although only just over an hour from Grillou the scenery here is very different - the valleys are narrow, edged in by tall, rocky peaks, and habitation tends to be gathered together in hamlets, some of which, like Mounicou, remain very traditional indeed. A lot of the walking here is of the 'sportive' rather than the Slow variety - but not all. We chose to explore Le Chemin des Orris, up above the man made Etang de Soulcem.

An orri is a low, round shepherds' hut found up on the estives - the summer high pastures - built entirely of dry stone (ie no mortar) and often topped with turf, or sometimes with slate. The design hasn't changed since the Middle Ages, when various confreries or guilds (some of which still exist today) were given the right to construct them on land owned by the local count, or king, or whoever; in some places - and we were in one of them - the orris were grouped into small hamlets, often around a communal courtyard. Until early last century, they would be occupied through the summer months not just by the shepherd but also by a part of his family, while the rest of the family remained down in the valleys to look after the crops; they would be used not just for habitation but also for cheesemaking, for the shepherd was also a fromager. Les Orris de Carla, closest to the lake at Soulcem, were in use until 1968.

To make sense of orris you need to understand the concept of transhumance. The transhumance is the leading of livestock - cows, sheep and horses - from their winter homes in the valleys, along roads, paths and mountain trails, up to the high mountain pastures - the estives. The system evolved during the Middle Ages and is still widely practised here in Ariège today, where it's not only a part of the farming calendar but also now a form of pastoral tourism: many people gather each May or June to follow the transhumance journeys up to the estives, which have become festive and convivial occasions as well as serious work. These days, some farmers have grouped themselves into associations which hire seasonal shepherds and cowherds to look after the animals, whereas others merely pay occasional visits to their livestock, often on a shared rota basis with colleagues. Pretty much wherever you walk in the mountains in the summer you'll come across animals; a few of the estives are fenced, though mostly the animals roam semi-wild, simply being led from one grazing area to another every so often by the shepherd or farmer. The sound of bells is an integral part of any walk in the high pastures.
The pastureland above Soulcem is stuffed full of orris, some of which have been recently restored. Sadly, six more groups of them were flooded when the lake was formed by the creation of a huge barrage. A lovely, and simple, walk takes you from the parking area at the end of the étang - at around 1200 metres - along the valley, either on the piste on the east side of the water or boulder hopping along the streams on the other. Longer and more challenging walks take you up and over the peaks to either side (it's quite possible to walk to both the Andorran, and the Spanish, borders), or in a circle up to a grassy shoulder.

This is one of the Orris de Carla, complete with new occupant: 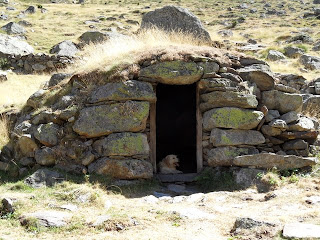 Inside one of the orris - the stone platform at the back would have been used for sleeping, covered in leaves and moss: 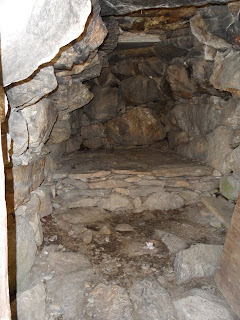 Part of a hamlet of orris higher up the valley. This one had an enclosure, and another piece of ground that looked as if it may have been used to grow things. 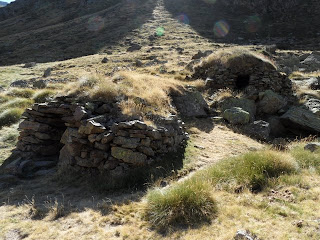 The piste leading from the étang is wide and accessible, though you still get a real feel of being in a high mountain area. Here it feels almost Alpine in character. 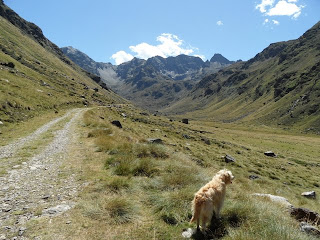 Down on the valley floor, where a herd of Mérens horses were grazing. Mérens are a native breed of Ariège, and are believed the be the closest descendants of the wild horses of prehistoric times. 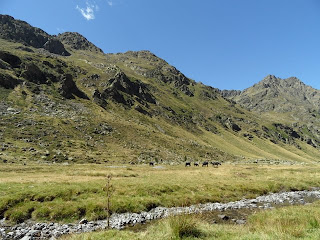 They are beautiful creatures. Just down the road from Grillou, at La Bastide de Sérou, is the Centre National de Mérens, where you can discover the breed in every which way. 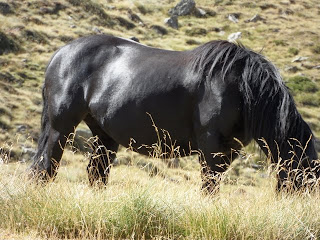 Fantastic lichen formations on the rocks .... 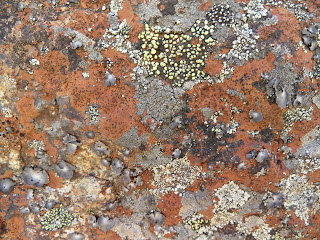 Much higher up the path on the grassy mountainside we encountered a shepherd moving a huge herd of sheep from one grazing area to another. We sat quietly and watched for a long time; the communication between him and his dog, a Border Collie, was almost mystical - none of the arm waving and almost constant yelling of One Man and His Dog (a series of TV programmes popular in the 1980s that set British sheep farmers and their dogs in competition with each other in various sheep dog-y exercises), but just eye contact and the occasional trill or other sound. If you click on the picture to enlarge it, you'll just see the shepherd standing on a rocky outcrop. 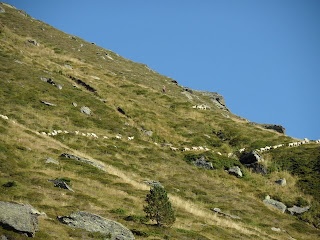 The other breed of dog that does this work is the Berger des Pyrénées. Our own dog is (mostly) one of these, though we've no idea whether he comes from a working family as he was originally taken in having been abandoned. However - and I'm aware that this may sound far fetched to some - when we were up in those high mountain pastures it was as if something was calling to him from a collective unconscious ... the way he looked, and listened, and thought ... a particular sort of alertness, a sort of intelligence, that was new. It was as if he was thinking "Hang on a minute ... I know something about this ... I've been here, before ...". 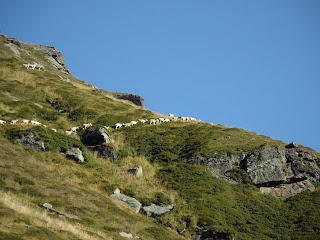